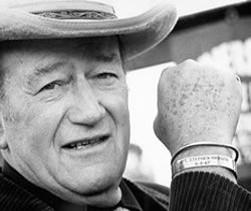 We first learned of Capt. Stephen P Hanson while watching a TV special on John Wayne. The story was a very moving one-about a young soilder in the Vietnam war who sent his wife and young son a picture of himself with the caption “Me as John Wayne.”

That man along with others in his crew would never return home. John Wayne wore his POW/MIA bracelet. John Wayne kept in touch through out his life with Capt.Hanson’s wife and son. One letter Duke wrote to Hanson’s boy when he was older said, “I wish you wonderful life. Just don’t expect too much out of it and you’ll have some wonderful years. That’s my sermon from the mount this year, Todd. Give ’em hell.”

John Wayne always supported the men in uniform. Due to a football injury he was never able to serve in the military so he turned his energies to ways he could help. He made films for the War dept. during WW2. The Duke was active with the USO visiting the troops from WW2 to Vietnam. He spent 6 weeks in Vietnam encourgaging the men and signing helmets. His film, “The Green Berets” was his tribute to those who served. He once told his wife, “Honey, someone has to stand up for those guys.”

Information comes from the National Archives, POW/MIA orginazitions and personal research.
If you are interested in learning more about the Montagnard People who presented John Wayne with his “Yard” bracelet please click on the banner below. John Wayne was presented one of these bracelets by a Green Beret Montagnard Strike Force in Vietnam. A letter from Duke regarding the bracelet is posted below. 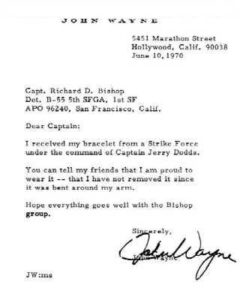 The John Wayne Bracelet was given to soldiers as a symbol of friendship and respect by the Montagnard tribe. Fortune Goods named this style of bracelet (bearing no etching) after “Duke” as he was given one by Montagnards during the filming of “The Green Berets”. Not only did Duke don the bracelet on his wrist until the day he passed, it’s said he lays with it to this day.