The story is simple, but it proliferates all that John Wayne stood for, Good from bad, and right from wrong. There is nothing complicated here. The story is basic. A wrong needs to be righted.
The story starts by pointing out its the end of the western era, 1909, and that times are changing. You are first introduced to a group of outriders led by Richard Boone, and consisting of a number of Wayne Movie regulars. They are obviously looking for trouble. 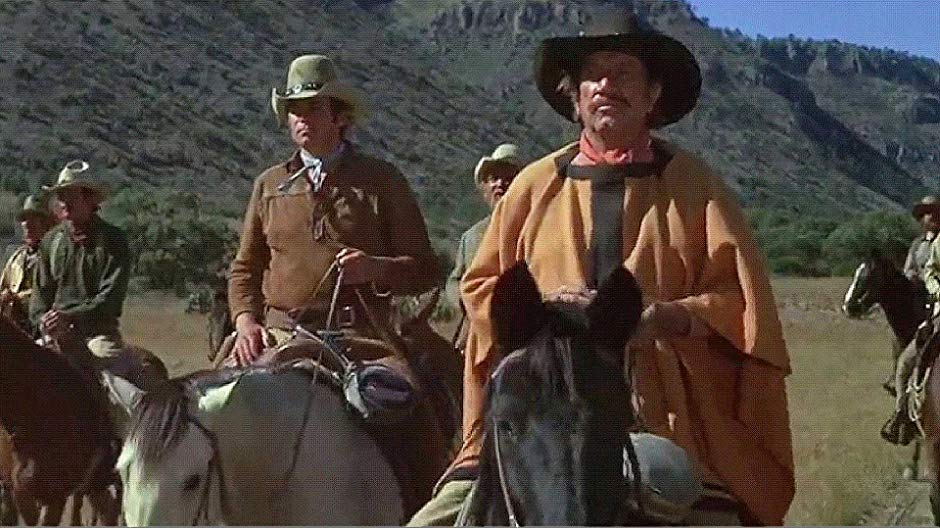 They arrive at the McCandle’s ranch, the richest ranch in the area, pretending to look for work. It’s pretty clear they are up to something else. Within minutes it’s obvious they intend to kidnap the youngest McCandles boy and hold him for ransom. A major gunfight and blood bath ensues. The kidnapping is successful.
During this crisis, we learn that Mrs. McCandle (Maureen O’Hara) is now the tough matriarch of the ranch

We also learn that her husband Jacob (John Wayne) had left many years before, although we don’t exactly know why. But as the story unfolds it becomes clear that Mrs. McCandle knows only her husband is capable of dealing with these outlaws, so she sends for him.

Enter Big Jake, whom is apparently roaming the prairie and has no interest in his large cattle holdings. As we meet him, he has a rifle bead on a bunch of cattlemen about to hang a shepherd. He rethinks his actions and is determined not to get involved. But then one of the cattlemen kicks the shepherds small child. Thats all it took. “Now what he have to go and do that for?” Jake says and enter John Wayne ! Right from wrong!

In the confrontation between the cattlemen and Wayne we not only learn how rough Big Jake is, but that his name is well known through out the territory. The running comment is, “I thought you were dead”. His answer..”Not hardly”.

After saving the shepherd and his child, then sending them to his ranch with promise of work, Wayne receives the message from Maureen. He returns to the town, named McCandle, (another hint at how “big” Big Jake is) and the ranch to answer his wife’s call. When Jake approaches his wife, you know instantly something is going on here. The first thing you see, is this tough guy walk up to his wife with his hat in his hand and wearing a decent suit. All subtle indicators that he has high respect for her.

During their discussion you note a demurred Jake. But you really get whats going on when Jake has to put on glasses to read the ransom note. Jake is obviously embarrassed to show his wife what time and age have done to him.

You know instantly that he is still in love with her. What makes this scene even more impressive, is that Mrs. McCandle purposely looks down so as not to stare and not shame him. But she does have to peek back up. At this same instant you now understand that she still loves him too. Its a subtle moment.

From this point on, no matter what else happens, you as the viewer know that this is a man with a cause. By now you know he has a history and capable to doing whatever he has to do to accomplish the task. He has never even seen the kidnapped grandson (played by his own son Ethan Wayne) but its personal now.

No one should ever claim this movie to be Academy Award material, but it was Pure John Wayne, and thats all that it needed to be. As the movie progresses, after the meeting with his wife, Jake meets one of his sons played by his other real son, Patrick Wayne. 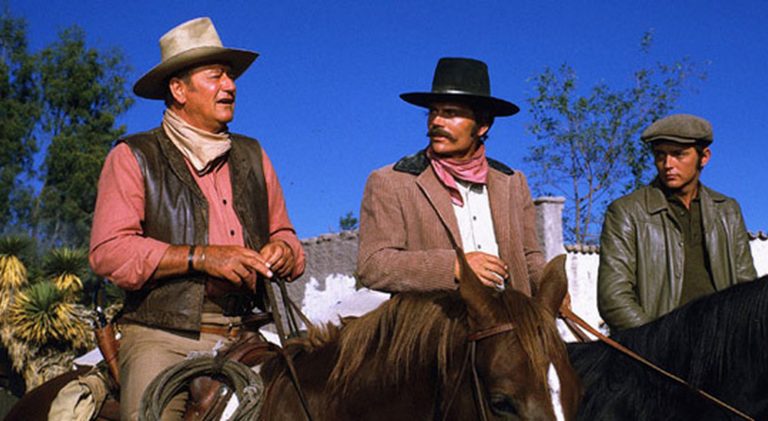 Everyone who is a fan is aware of the “You can call me father” scene, and it was the scene everyone will always recall from this movie. Its a great scene.

The point of that scene, and the later one where Jake pops his other son in the mouth for making him think he was dead, (played by Christopher Mitchum) may not be remembered by the populous generally, but they made a point. Fatherhood demands respect and responsibility. Jake knew he

was derelict in his responsibility but he knew to the day how long he had gone without seeing them. For that he demanded respect.

For a simple story, there was a lot going on here. Wayne knew what worked for him and wasn’t afraid to reuse past successes. Big Jake had a dog (Hondo). He was the largest rancher in the territory. (Chisum, McLintock). He had to chase down the bad guys. (True Grit, Rooster Cogburn, Cahill: US Marshal, The Train Robbers) Other subplots included the fact that Jake was getting old and times were changing. (Also a theme in The Shootist)
Wayne knew he was no longer believable as the guy who got the girl, so these movies already gave him his girl and a reason not to be looking for one. Family, duty, and honor, were keynotes in this movie as were they almost in all of Wayne’s later works. 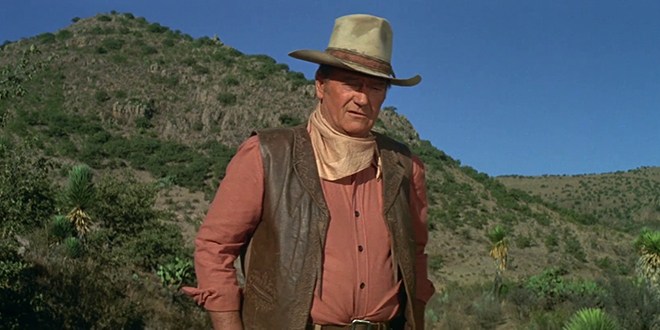 Wayne also knew there had to be comedy too. The bar fight scene was reminiscent of North To Alaska. Interaction with his two sons was peppered with humor. Especially when son Patrick got a buckshot spread in the backside. This movie worked at almost all levels. I have never met anyone who didn’t like this movie. Yet it rarely is noticed when John Wayne movies are discussed. If you have never seen it, you should.